The MY2020 Kia Seltos will be offered with updated features across the line-up. All variants of 2020 Kia Seltos SUV will get emergency stop signal & front and rear USB charging as standard. The sunroof will be seen on the HTX and GTX variants as well

Launched in the August last year, the Kia Seltos SUV has been one of the hot-selling models in the Indian market. And, soon we expect the car to receive an update. The updation, though, will be more on the feature front. According to a leaked document on the internet, Kia will be reshuffling the features on the SUV that were seen at the time of launch. Moreover, the 2020 Kia Seltos is expected to get a price hike as well, but there is no official update regarding the same from the car manufacturer. 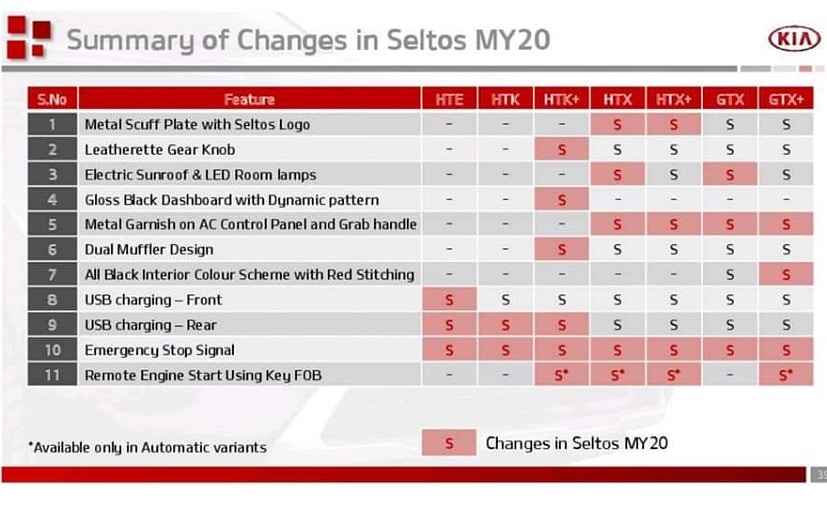 Going by the leaked document, the HTE trims of the Kia Seltos now receive USB charging at the front and rear along with emergency stop signal. These new features are now being offered as standard across the line-up. On the other hand, the HTK Plus trim gets a leatherette gear knob, gloss black dashboard with a dynamic pattern, dual muffler design and remote engine start using the key FOB. Additionally, the HTX and HTX Plus trims get a metal scuff plate with the Kia logo. Moreover, the metal garnish on the AC control panel and grab handle is now offered on HTX, HTX Plus, GTX and GTX Plus. The HTX trim will also be equipped with an electric sunroof and LED room lamps. 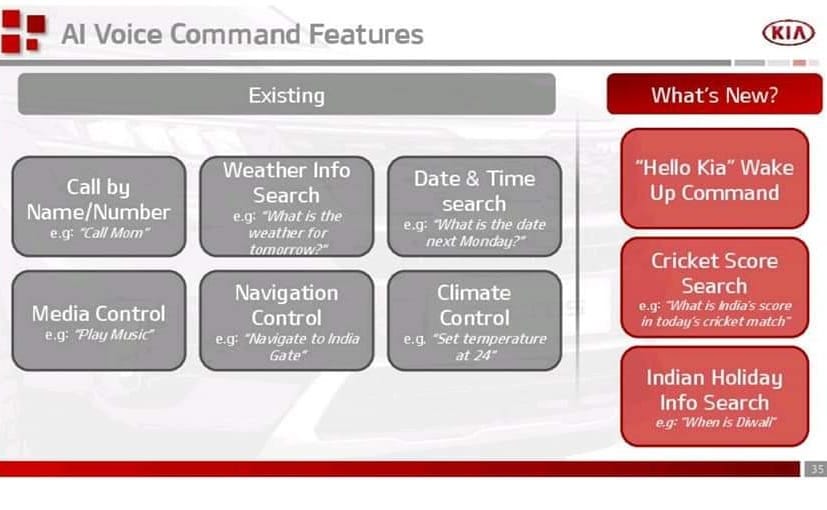 The company will also be offering new AI voice command features including – ‘Hello Kia’ wake up command, Cricket score search, Indian holidays info search and much more. The company will also be offering dual-tone exterior colour scheme on HTX Plus and GTX Plus trims. The GTX trim will witness the inclusion of new features such as an electric sunroof and LED lamps in the cabin. On the other hand, the GTX Plus trim will see the addition of the metal garnish on the AC control panel and grab handle along with black interior colour scheme with red stitching.

Coming to the mechanical front, the 2020 Kia Seltos is expected to remain untouched. It will continue to get the 1.5-litre petrol, 1.4-litre turbo-petrol and 1.5-litre diesel engine options. The 1.5-litre petrol and diesel units come mated to a six-speed manual gearbox as standard. The company is also offering a CVT and six-speed torque converter automatic transmissions as an option respectively. The 1.4-litre turbo-petrol motor, on the other hand, gets a seven-speed DCT unit. The carmaker is expected to reveal the prices for the 2020 Seltos soon.