The design modifications undertaken, particularly to the front sections of the E-Class Coupé and Cabriolet, bring added refinement. Among the hallmark Mercedes-Benz design features are the torch-flame effect and two unlit pins. With the optionally available MULTIBEAM LED headlamps, the latter are lit. The ‘A-shape’ design of the new diamond radiator grille, which is likewise standard on all versions, adds a particularly dynamic touch. The grille also features chrome-plated dots, a single louvre and the Mercedes star in the centre. A new highlight of the muscular rear section is the completely redesigned inner workings of the two-piece tail lights, featuring LED technology. The star module with integrated reversing camera is inset into the boot lid. 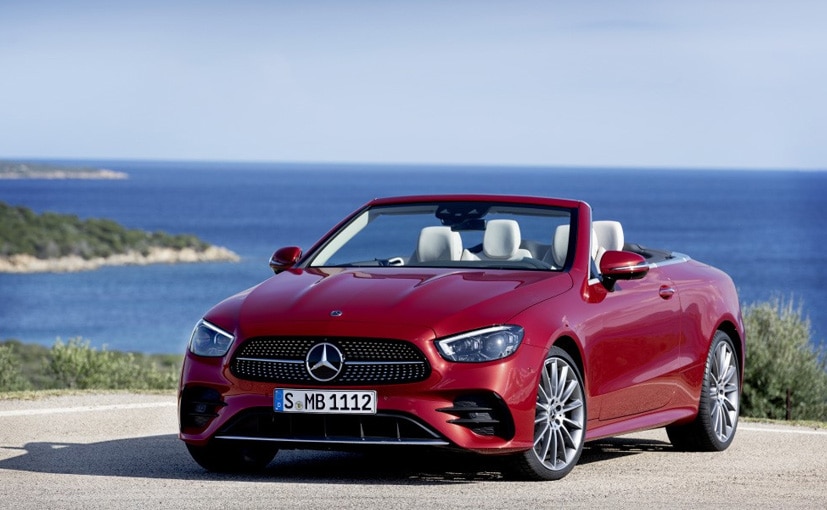 The four paint colours newly available for the E-Class Coupe and Cabriolet as part of the facelift are high-tech silver, graphite grey metallic, mojave silver and patagonia red (designo). The wheel line-up has also been expanded and now includes aero wheels, as they are called, the special design features of which help contribute to saving fuel and thus to sustainability.

As was already previously the case, the interiors of the Coupé and Cabriolet combine contemporary style with sporty luxury. The upper section of the dashboard appears to hover; it rests on generously proportioned trim elements that flow through into the doors. The exceptionally high-quality materials selected, together with the quality of craftsmanship employed, serve to emphasise the car’s sporty, stylish character and exude outstandingly high-class appeal. New-look trim options – open-pore grey ash wood and aluminium with light carbon-fibre grain – serve to enhance the interior.

The integral-look sports seats feature prominent side bolsters and integrated head restraints. The seat contour sees side bolsters and, depending on the specification, the centre section has sporty transverse or modern longitudinal seams. The colours of the centre sections of the seat backrest and cushion are coordinated with the overall sculpture of the seats. Numerous material combinations ranging from fabric to ARTICO man-made leather, embossed leather, nappa leather with diamond quilting and even sun-reflecting leather (for the Cabriolet) are all possible. 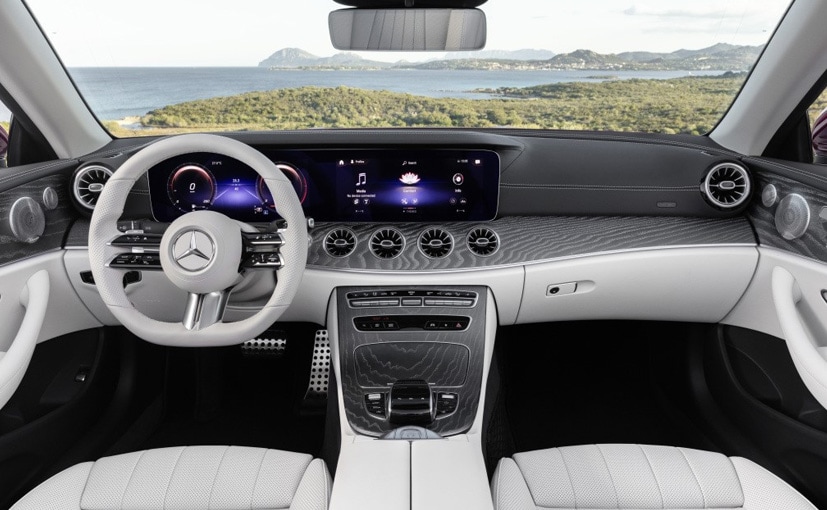 The new E-Class has the latest generation of Mercedes-Benz driving assistance. The hands-off detection feature of the steering wheel now works on a capacitive basis, thereby enhancing user-friendliness when driving in semi-automated mode. That’s because to inform the assistance systems that the driver still has control of the E-Class, it is sufficient for the driver to hold the steering wheel. Steering torque – that is to say a slight steering movement – was previously required as feedback in order for this to happen. The new steering wheel (see next chapter for details) features a pad with the appropriate sensors in the rim. These register whether the driver is holding the wheel. If the system detects that the driver does not have their hands on the steering wheel for a certain time, a warning cascade is started, which finally activates Emergency Brake Assist if the driver continues to be inactive. 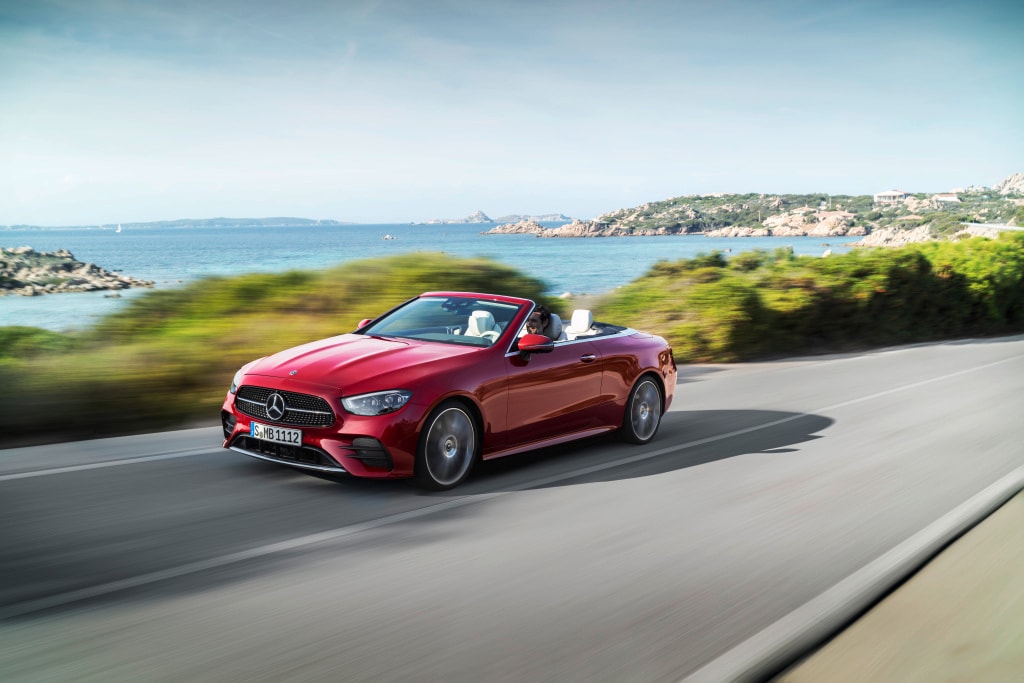 As standard, the E-Class comes with Active Brake Assist, which in many situations is able to use autonomous braking to prevent a collision or mitigate its severity. The system is also able to brake for stationary vehicles and crossing pedestrians at typical city speeds and even to prevent collisions, depending on the situation. As part of the Driving Assistance Package, this is now also possible when turning off across the oncoming lane. A range of further Intelligent Drive functions can optionally be added to the Driving Assistance Package.

The E-Class is fitted with an entirely new, intelligent steering wheel as part of the facelift. This is available as a leather steering wheel and in a super sports variant. The control surfaces sport a high-gloss black finish, while the trim elements and surrounds have a silver shadow finish. The functions of the instrument cluster and media display are operated using touch controls, the physical principle of which has been changed from optical to capacitive.

It’s also equipped with the latest generation of the MBUX multimedia system. As standard, it includes two large 10.25-inch arranged side by side for a widescreen look. Two 12.3 inch screens are optionally available. The information in the instrument cluster and on the media display is easily legible on the high-resolution screens. An emotive presentation with brilliant graphics underlines the comprehensibility of the intuitive control structure. 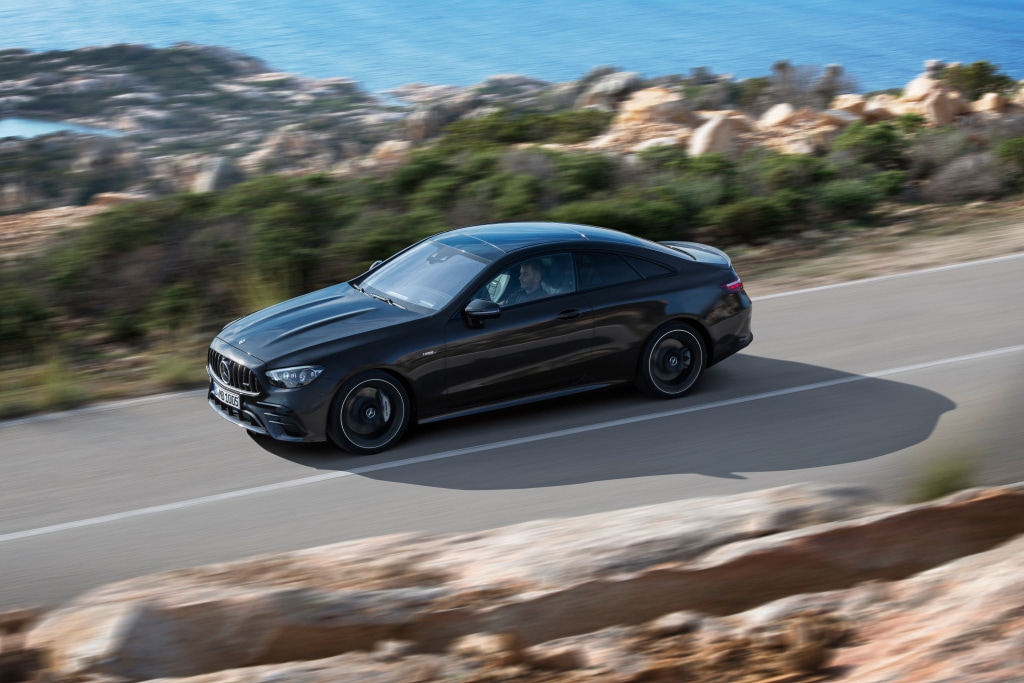 The electrification of the powertrain takes another major step forward with the facelift of the E-Class. The new two-door models also see the top version of the four-cylinder diesel engine, rated at 261 bhp, fitted for the first time with an integrated starter-alternator (ISG). It therefore has a 48-volt on-board partial electrical system. A recuperation function and the ability to glide with the engine switched off making the engine even more efficient.

Ongoing development work means that the integrated starter-alternator used here is a second-generation unit that is now part of the transmission (rather than of the engine). This means that it can be more easily combined with different engines. The extra boost that is available right from the first turn of the engine, known as EQ Boost, can deliver as much as 20 bhp and 180 Nm, thus ensuring that the driving enjoyment offered by both of the sporty two-door models is even more pronounced.

The 48-volt technology with ISG is also a feature of the in-line six-cylinder petrol engine, now available for the first time in the E-Class. As with the Saloon, Estate and All-Terrain models, this unit has now been added to the engine line-up for the two-door models. A unit that is already familiar from the CLS, S-Class and GLE, its electrical boost of up to 21 bhp and as much as 250 Nm. The standard combination with the all-wheel drive system 4MATIC further accentuates the dynamism of these two models. The systematic electrification of the engine is a major factor in the exceptional efficiency of the powertrain and evidence of the company’s forward-looking drive system strategy.

Further improving efficiency is the new OM 654 M with integrated starter-alternator. Along with electrification, which also includes the use of an electric refrigerant compressor for the air-conditioning system, the following are the most important modifications that allow an output of up to 261 bhp plus an additional 20 bhp from the EQ Boost system