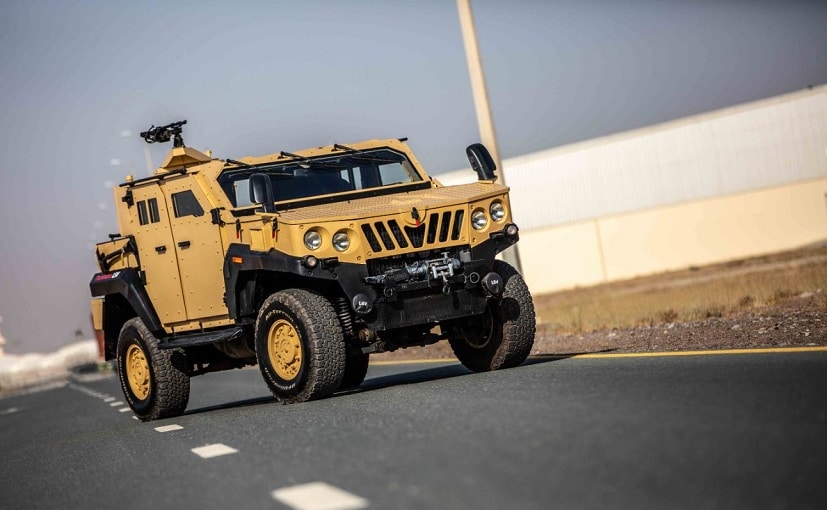 Mahindra ALSV is technically developed for patrolling in high-intensity areas. The vehicle is capable of raiding any terrains, be it open or desert. Generally, the armoured vehicle is employed by special forces for certain operations or as a part of quick reaction teams.

Mahindra’s Armoured Light Specialist Vehicle (ALSV) is a light armoured vehicle specially designed for military and defence purposes. This tough machine has already undergone the Government’s Defence trial & test program for about 18 months. The vehicle is designed by Mahindra Emirates Vehicle Armouring (MEVA), which is a part of the Mahindra & Mahindra group. Notably, MEVA is very much experienced in developing armoured vehicles as well as tactical armoured vehicles. Highlighting its toughness and capability to take on any terrain, Mahindra Group’s chairman Anand Mahindra took to Twitter for praising the armoured vehicle. He tweeted on Twitter by saying, “Our defence team believes M&M translates to ‘Mean Machine.’ This is one of their meaner ones.”

Also Read: Mahindra To Help Migrants Get Back Home Amid Nationwide Lockdown

Our defence team believes M&M translates to ‘Mean Machine.’ This is one of their meaner ones… https://t.co/yZpbQHmpqS

This special armoured vehicle, Mahindra ALSV has been developed for patrolling in high-intensity areas. The vehicle is capable of raiding any terrains. Generally, the armoured vehicle is employed by special forces for certain operations or as a part of quick reaction teams.

Mahindra ALSV offers protected mobility from all-sides as per STANAG Level I Ballistics and Blast for four crew members. The vehicle is capable of withstanding 51mm bullets & hand grenade blasts. It also offers sufficient storage space for ammunition with an additional 400 kgs cargo load-carrying capacity. Moreover, this special vehicle can also be upgradable up to STANAG – II Ballistics.

This vehicle comes powered by a 3.2-litre, 6-cylinder turbodiesel engine from Steyr. The unit is capable of producing 212 bhp of maximum power with 500Nm of peak torque. It comes mated with a 4-speed automatic gearbox. Mahindra ALSV is claimed to hit 60 kmph from standstill position in just 12 seconds before hitting the top speed of 120 kmph. Moreover, the vehicle gets 30-degree gradability with parking brake and 50 Kms run-flat system on all wheels. This armoured vehicle is available in several variant options ranging from 6-seat to 8-seat configuration along with ammunitions.