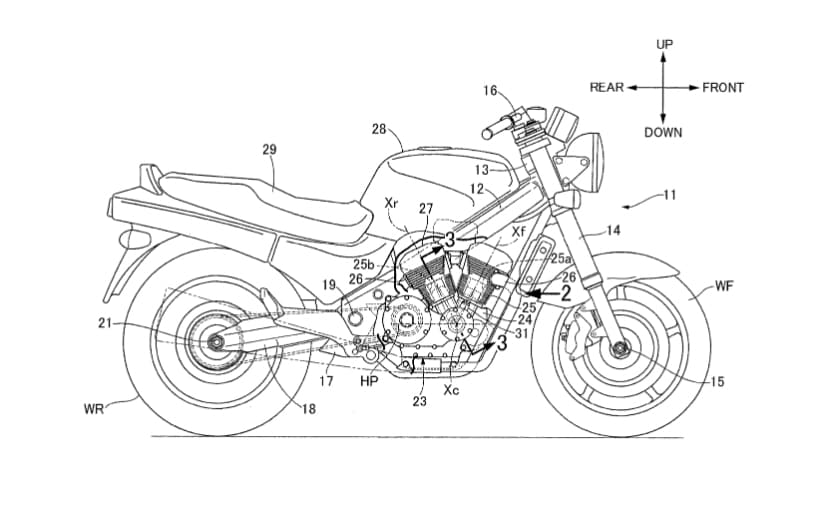 Honda may be looking to introduce a new street bike powered by a v-twin engine, as latest patent images seem to indicate. The leaked patent images show a retro-styled roadster, with a silhouette straight out of the 1980s, but what is of interest is the type of engine used. While the patent filing does not reveal the displacement of the engine, it confirms the v-twin type architecture, an engine type currently used by Honda on a few cruisers. If the patent images are any indication, Honda may just well be looking to introduce a neo-retro roadster, but powered by a v-twin engine, instead of the current in-line four engines used in the CB series.

The patent document doesn’t really elaborate on the v-twin engine, and also doesn’t mention any formally considered applications. But what the drawings clearly show is the v-twin nestled inside the chassis. The profile of the bike doesn’t resemble the styling of the current Neo Sports Cafe styling of the Honda CB1000R, but is somewhat closer to the Honda CB1100’s retro styling.

What we know so far is that the patent was originally filed in February 2018, and it’s only been published now, towards the end of April 2020. So far, it’s anybody’s guess if Honda has production plans of any such model, or if the patent was used to showcase just the v-twin engine. But if at all, it’s on Honda’s upcoming model list, a retro roadster with a litre-class v-twin certainly sounds interesting! If any such plans are afoot, expect a concept at some point to be showcased, possibly by the end of the year, or sometime in 2021.