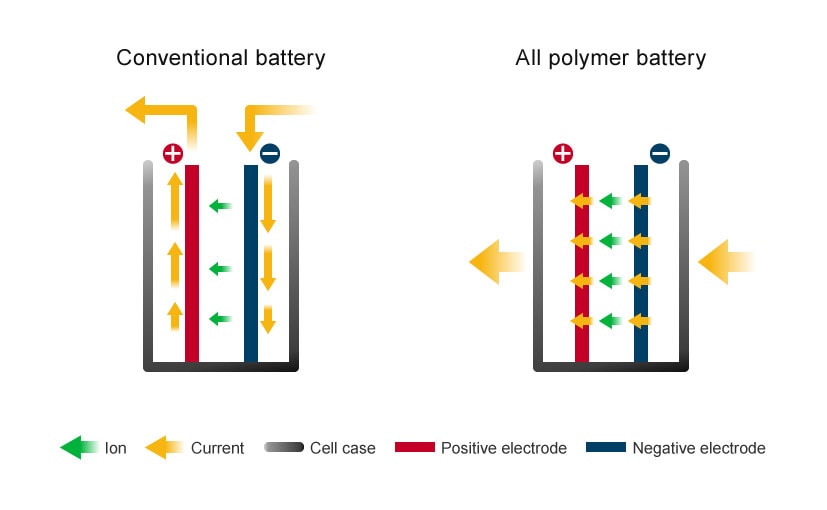 Nissan has licensed an advanced technology to APB Corporation that will allow mass production of lower-cost, safer lithium-ion batteries with increased charging capacity. Backed by investment from major companies, Tokyo-based APB plans to build a factory in Japan that will use Nissan’s technology to make all-polymer batteries for storage use. Nissan’s technology, known as bipolar structure all-polymer battery technology, will help consumers to more effectively use low-cost or renewable energy at a lower initial cost.

Hideki Kimata, vice president of the corporate strategy and business development division at Nissan said, “We believe the widespread adoption of this technology will contribute to fulfilling the U.N.’s sustainable development goals and help realize a sustainable, low-carbon society.”

In an all-polymer battery with a bipolar structure, the liquid electrolyte and metal electrodes used in conventional batteries are replaced with polymers. The front and back of the battery cell are made of a polymer current collector. The front and back each has a negative or positive polarity and forms part of the battery case. By stacking a number of these cells together, an assembled battery with a bipolar structure is created. The technology increases charging capacity relative to battery volume, while also enhancing safety by replacing liquid electrolytes with polymers. The simplified structure also lowers cost.

Mainstream use of stationary batteries with this technology will help individual customers make effective use of low-cost electricity, such as renewable energy from solar panels or electricity purchased from the grid during off-peak hours, with a smaller initial investment. As a result, local communities can limit electricity use during peak hours and use power in a more stable and efficient manner. This reduces the risk of blackouts due to disasters or technical failures, and can contribute to a safer, cleaner energy supply.