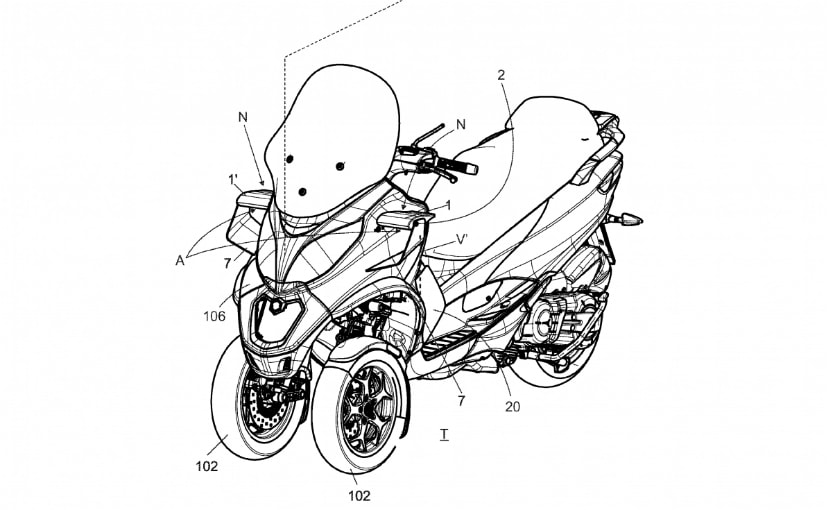 The winglets, like the ones used on MotoGP bikes, are designed to permit faster cornering speed, more downforce and lighter front end load.

Italian two-wheeler brand Piaggio, which owns Vespa, Aprilia and Moto Guzzi, has filed a patent for an active aerodynamic system for future scooters. Latest patent images show the nex-generation MP3 scooter may get active aerodynamic technology, in the form of moveable winglets mounted on the front fairing. The patent images show the MP3 scooter with two wings that are mounted on the left and right sides of the front apron. And while it may be the first scooter to get MotoGP-style winglets, the Piaggio system also makes them active. The active aero system doesn’t remain stationary while the scooter is being ridden. Instead, the winglets on the MP3 will react to the dynamics of the scooter, in the way it’s being ridden. The C-shaped winglets can rotate up and down just like the flaps on an aircraft’s wings. These are electronically controlled with electric motors moving each winglet independently, and sensors in the scooter decipher the speed and lean angle to adjust the winglets.

The winglets can move as one, with both winglets providing the same amount of force and in the same direction, or independently to help increase the rotation of the bike as it leans into corners. When one winglet is positioned upward and the other downward, the active aerodynamic system provides a rolling torque to the upward winglet to increase corner entry and exit speed. The winglets also work together, moving in the same direction to generate more downforce on the front wheel and downward to lighten the weight on the front end. The system is said to work best at speeds in excess of 50 kmph. So far, there’s no details on if the patent will be used on any production model, be it a scooter or a sportbike like the Aprilia RSV4 or Tuono V4 1100.